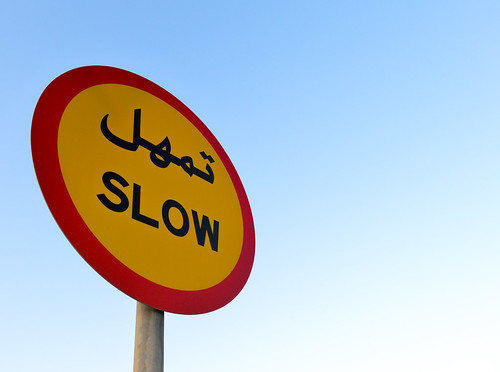 Arabic is spoken in various forms by more than 250 million people as a mother tongue‏‎ throughout the Middle East, North Africa and beyond.

Because there are strong regional variations in Arabic, the notes below will not necessarily apply to all Arabic speakers.

Because in spoken Arabic /p/ does not exist, many Arabic speakers have difficulty hearing the difference between and pronouncing the bilabial plosives /p/ and /b/ (see the link here‏‎ for a video on how to explain this problem to your students and practice it with them as well).

Arabic tends to “roll” the /r/ sound so producing the English /r/.

Other problems in pronunciation occur because Arabic does not have the same distinction in sounds between the following:

In lists, Arabic will not use a comma and instead use and, e.g.

I want you to bring a pair of scissors, three shirts, long, black socks and several tall, thin sticks.

* I want you to bring a pair of scissors and three shirts and long and black socks and several tall and thin sticks.

Punctuation‏‎ will need to be practiced as written Arabic differs greatly from English!

Arabic often begins sentences‏‎ with the definite article‏‎ and explanation should be offered here.

Verb tenses‏‎ and forms‏‎ in Arabic sometimes have very different usage to English‏‎. The perfect tenses‏‎ will need practice in particular. To take a simple example, Arabic does not have the present perfect and uses the past simple‏‎ instead.

In Arabic this verb is omitted; thus an Arabic speaker may well say in English:

* My name Mohammed and I engineer.

In addition, Arabic uses has with age (in common with a number of other languages):

* I have twenty years old.

Arabic makes no distinction between these two relative pronouns and so you may well see a sentence like this:

* This is the car who I bought yesterday.

* She is the woman which stole my money!

As a matter of general style, often Arabic speakers will make no difference between descriptive and creative writing so there are cases where, for example, scientific writing will include purple prose which would be out of place in English.