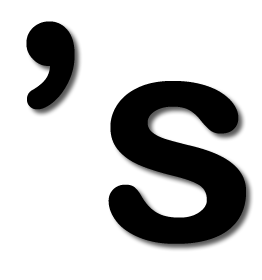 Possessive Apostrophes are added to the end of a noun to show possession‏‎.

This car belongs to John. It is John’s car.

That dog belongs to that girl. It is that girl’s dog.

Note, a Possessive Apostrophe is sometimes known as a Saxon Genitive.

If there is a plural noun‏‎ which ends in an -s, then we add just an apostrophe after it (no extra -s). In this case there are many girls and boys who each have bikes:

In this next example we are referring to 1 lady and her bag:

However, in this example we are referring to many ladies and all their bags:

Note that for plural nouns which do not end in -s we use the apostrophe along with an -s:

That is Shakespeare’s play.

This is Napoleon’s hat.

There is some confusion when it comes to proper nouns which end in -s. In most cases we can add an apostrophe -s.

This is Ross’s book.

However, if the proper noun ends in -es then we normally use an apostrophe without the -s:

Having said this, there are different opinions about using an -s with any proper noun which already ends in -s or an -s type sound. These are all acceptable: