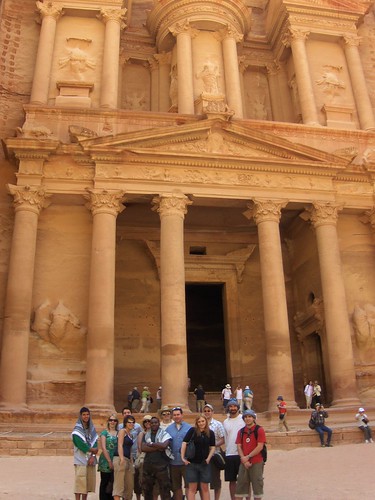 Jordan is a country spanning the southern part of the Syrian Desert down to the Gulf of Aqaba. Jordan shares borders with Syria to the north, Iraq to the northeast, Saudi Arabia to the east and south, the Gulf of Aqaba to the southwest, and Israeland the West Bank to the west. It shares control of the Dead Sea with Israel. Much of Jordan is covered by desert, particularly the Arabian Desert; however the north-western area, with the Jordan River, is regarded as part of the Fertile Crescent. The capital city of Amman is in the north-west. It has a population of about 6.5 million and an official language of Arabic.

Jordan is a growing economy and looking out to the rest of the world. As a consequence, there is a demand to learn English and there are a good number of jobs available to trained teachers. There are numerous public and private schools, as well as NGO’s, UNRWA, UNICEF, and the UN, which offer teaching opportunities in the country. Amman has dozens of English institutes and employment is easy to find. There are also excellent teaching opportunities in other cities such as Irbid, Jerash, and Aqaba.

The Ministry of Education requires that any English teacher looking for employment in ESL/EFL must have a degree in English and a TEFL Certificate.

Depending on experience, the average salary for an ESL instructor in Jordan is around $1000 per month, tax free. This is far more than most Jordanians earn.

It is difficult to organise a job in Jordan without actually being there unless you are highly qualified and experienced. Some jobs will reimburse between 50 – 100% of your airfare to Jordan at the end of your contract.

Citizens of the United States, the UK, Canada, Australia and the EU can obtain a one month, single-entry visa on arrival at any point of entry in to Jordan except for the King Hussein Bridge at the Jordan/Israel border. Multiple-entry visas can only be obtained at the nearest embassy/consulate.

After your visa has expired, you can extended it for an additional three to six months without the need to leave Jordan. If visiting Israel and the Palestinian authority it is advisable to obtain a multiple entry visa before departure.

For stays over six months, you are required to take an AIDS test at a local government medical authority.

It is advisable to check with your nearest Jordanian embassy or consulate as to exactly what you need to do in order to apply for a tourist visa to enter Jordan.

To work in Jordan you will need a Residence Permit. Usually this is organised and paid for by the school.

Jordan has a dry, desert climate – hot during the day and chilly at night. It is an exciting, vibrant country (the markets especially!) but there are major franchises and western stores in places like West Amman.

Jordanians tend to be friendly, outgoing people. Modesty is a virtue here.

3 Responses to Teaching English in Jordan