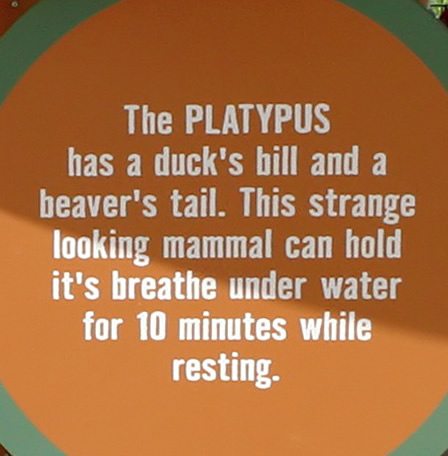 Its and it’s are often confused, not only by learners but also native English speakers (the picture on the right comes from one of Disney’s theme parks). This article explains the difference between them.

Very simply, its (without the apostrophe‏‎) is a possessive pronoun meaning, “belonging to”:

The tablet surprised me with its quality.

Its fur was soft and lightly colored.

Both these show something belonging to: in the first example quality belonging to the tablet. In the second example fur belong to (presumably) a cat or some similar animal.

Simply put, it’s (with an apostrophe) is a contraction of it is or it has.

It’s raining. = It is raining.

In most cases – although not all – it’s comes at the beginning of a sentence‏‎.

The key here is to remember that an apostrophe here stands for something which is missing. Simply expand the word with an apostrophe and see if the it fits in correctly.

* A dog’s growl is worse than it’s bite.

* an asterisk at the beginning of a sentence denotes an ungrammatical sentence.

Here we can expand it to see:

* A dog’s growl is worse than it is bite.

Which is obviously wrong!