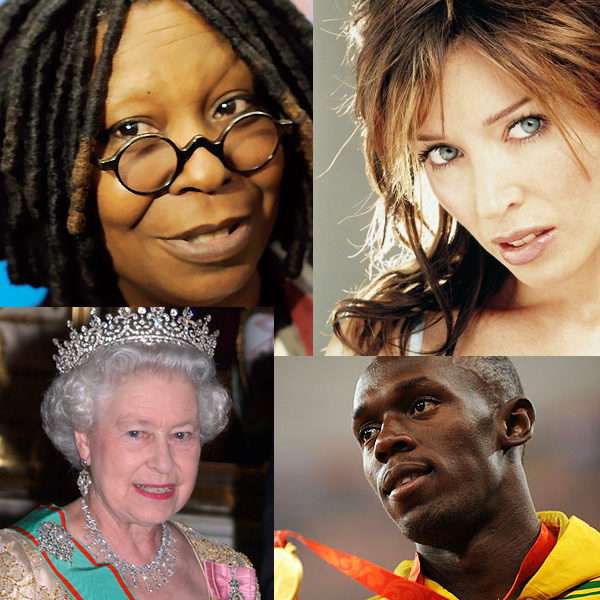 Varieties of English are the different kinds of English used around the world. Often these are geographically based. The varieties are more or less similar and while most English speakers can understand each other, there are occasional problems.

The four people in the picture (Whoopi Goldberg, Kylie Minogue, the Queen and Usain Bolt) all speak English as their mother tongue but very differently.

English has been the native language of England for over 1,000 years. Due to various cultural, economic, migratory and other reasons the language spread across the world to what became the USA‏‎, Canada‏‎, Australia and many other countries. It was also used as the lingua franca‏‎ in many other places (often countries which formed part of the British Empire).

However, language is never static. In relative isolation from each other (this spread of language took place before the advent of modern communications) the language used in these different countries began to develop independently from the original language, often influenced by local languages as well.

(In Australia, for example, there were a number of new animals never encountered by Europeans before and these needed to be named; often the names came from local Aboriginal languages. These words, of course, never existed in the English of England.)

The result was that the varieties of English language we hear today are linguistic cousins, all descended from the English spoken in England several hundred years ago.

Dealing with main varieties of English, we can talk of:

However, there are many other varieties and virtually all countries where English is spoken has their own variety. Sometimes these are very closely related but other times they can be very different.

In addition, each main variety of English has sub-varieties or regional variations. For example, within the British English variety we have: Cockney, Essex English, Geordie and so on, not to mention Scottish English, Welsh English and Irish English.

There are also socio-economic varieties of English. The Queen speaks Received Pronunciation which is very different from the Black English‏‎ spoken in America, for example.

There may also be differences in grammar such as the AmE use of gotten‏ against the BrE use of got. There is also the AmE preferred use of the past simple‏‎ where BrE tends to use the present perfect simple‏‎.

Generally speaking, different countries prefer their teachers to teach different varieties of English. Often the reason for this is historical and political. As a rough guide:

Both are taught in China.

However, this is a very rough guide and you will find schools often have no preference for the variety of English taught.