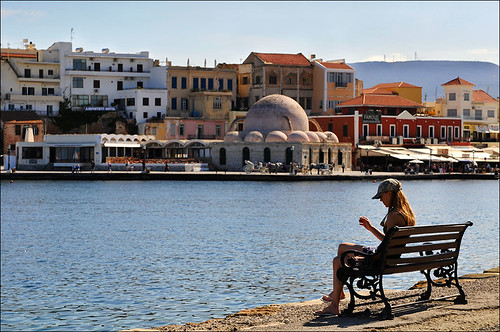 Greece has traditionally been a popular destination for first time teachers. Although some years ago there were thousands of British and Irish teachers in the country (plus a few other nationalities) due to the recession and declining birthrate the number of teachers needed has slowly declined.

However, there are still jobs to be found. The pay is not fantastic, but it is an amazing country to live and work in. Long, hot summers, a relaxed attitude to life and very lively nightlife are just a few of the benefits of living and teaching English in Greece.

Teaching English is mainly done through private schools called frontisteria. These are often small affairs with anything from 10 to 1,000 students and there are many throughout the country; every small town will have two or three though not all will have a native English speakers working there.

You’ll be teaching from coursebooks‏‎ with classes of about 15 or so students. They are lively, inquisitive and talkative (perhaps too talkative!) and often very keen learners. Greeks tend to be good linguists and teaching English is not onerous with well-behaved classes and teachers offered more respect than in the United Kingdom, for example.

The working week is often about 20 contact hours per week (plus preparation). There is often the option of extra hours during exam time (i.e. when the older students take the First Certificate in English‏‎ or Certificate of Proficiency in English‏‎ exams). Schools will often help finding accommodation and sorting out the paperwork.

Many teachers also pick up extra income teaching private lessons which can be quite lucrative. A number of teachers live entirely from this.

Qualifications to Teach English in Greece

To teach English in Greece you’ll need a degree and a TEFL Certificate.

Because of visa issues, it is very difficult for teachers from outside the European Union‏‎ to find work in Greece. And there is also a requirement to have a proficient command of Greek‏‎ and pass an exam to prove this. However, this is illegal according to European Union‏‎ legislation and therefore technically not required. The majority of schools will ignore this requirement.

The UCLES exams are big business in Greece but recently the British Council‏‎ has lost its monopoly on examining students and two or three other groups are planning on doing so. This means there will be a need for new examiners and this can be quite lucrative and worth investigating if you’re qualified.